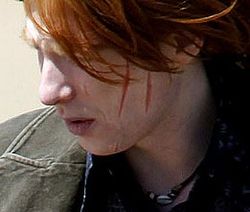 Molotov is usually dressed in the orange and yellow robes Shaolin Monks are most commonly seen in. His hair is red-orange, it is a light mix. When disguised by the mist he wears a very loose belt. But for those who see through the mist it is actually a bronze forged Chinese broadsword. His hair stretches down his neck, and bangs that hang over his eyes. He often gives an impassive stare with his eyes. Giving off a feeling of security. His face is lined with scars from monster attacks from his travels within Eurasia. Eye(s): Green Hair: Red-orange Height: 6'2 Build Type: Lanky

Drysi Rasputin was the last of Grigory Rasputin's descendants, her mother always told her that she must carry on her ancestor's legacy. She was approaching the end of her life, due to loneliness and a severely weak immune system. Mighty Zeus took pity on this miserable soul and decided he would apply meaning to her existance. shortly they fell in love with one another, and thus Molotov was sired.

Molotov's mother died when he was five outside of a Buddhist temple in China. She was ill with Tuberculosis for over three years finally succumbing when she knew her child was safe. The Buddhist monks raised him. They knew exactly what he was. A demi-god, they had kept this a secret from him until the sent him out into the world. But for the short six years, he was trained as a Shaolin Monk. He was an expert swordsman by the end of his first year of training. Although he could not grasp the fact that he was supposed to be calm and serene. He often craved battle. This conflicted with the monks. So when he was eleven the monks told him he was a decendant of the Greek Gods and he was forced to travel the world alone, with his bronze sword. Which he named Суждение (Judgement). Before he set out for the west he trained in the harsh climate of his native country of Russia. in his travels he found himself attacked and injured by monsters many times. But however his demi-god parent had yet to claim him. And so on his seventeenth birthday he arrived in America. Hoping to find this special camp he had heard so much about.

Molotov is a relatively ill tempered boy. This usually ends up in him resulting in violence. He seems to be loyal to his family and any friends, being ready to take a bullet for them if needed. He appears to be vain and tends to swear vendettas against those who beat him and gloat about it. He also does not know when to stop and will usually fight to the death. 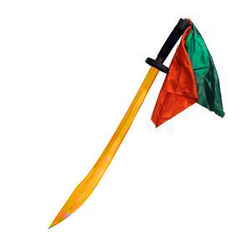 Being a child of the big three he is possesses accelerated physical abilities of normal demi-gods. His mind is even more Greek-set. He is also able to control lightning on some level. His only two uses of the power are able to cast thunderbolts and the ability to release a steady stream of lightning to slow kill, or torture his opponent. These two abilities are only triggered in high states of emotion, or intense anger.

His most adept skill is in his swordsmanship. He often pin points the most effective points in the human body to incapacitate his opponent. As much as his Shaolin Training kicks in those Greek impulses get in somewhere and he will often press through his opponents with amazing strength. His style with these two different fighting tactics often transcribes itself into an agressive one-handed kendo style. Weapons

Retrieved from "https://campolympians.fandom.com/wiki/Molotov_Rasputin?oldid=4256"
Community content is available under CC-BY-SA unless otherwise noted.